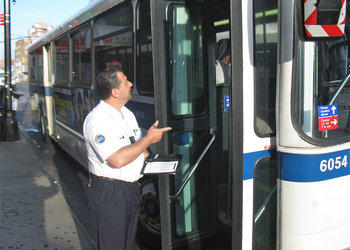 Comprised of over one hundred Surface Line Dispatchers and thirty seven Maintenance Line Supervisors. All of which are Civil Service employees employed by the New York City Transit Authority.

I’ve been a Dispatcher at Casey Stengel Depot since 1999 and have been working for the Transit Authority since 1992.

Our Surface Line Dispatchers work in some of the best areas of Queens, but also work in some of the busiest areas of the entire city. Queens, unlike other boroughs of the city does not have many subway lines running through it. Therefore, the buses have to pick up where trains do not and take the masses of riding public to the subways. For example; the # 7 subway line at Flushing, Main Street has twenty bus routes that terminate or connect at that location. Jamaica center at Parsons Blvd. and Archer Avenue has nineteen bus routes that connect with the E, J and Z subway lines at that location; in Kew Gardens at Queens Blvd. we service the E and F subway lines.

Our Maintenance Line Supervisors are some of the most knowledgeable in the Transit Authority, mentoring many newly promoted supervisors on how the job is done. After being in this position for eighteen years I have gained a tremendous amount of respect for the position of Maintenance Line Supervisor. Being a Line Supervisor you need to know how to manage people, this includes managing hourly employee’s time, personalities and talents.  All while under the gun of trying to make pullout (getting the buses on the road for rush hour) with a fleet of buses that are constantly falling apart due to the rough environment of the streets of New York.

Queens Division Unit meetings are held on an as needed basis which is usually about three times a year at the Community church of Little Neck, 46-16 Little Neck Parkway Little Neck, NY 11362. Since we only have a few meetings a year I expect everyone to take the time out to attend.

Queens Division has a reputation for being an astute bunch that know the rules and regulations along with the contract and are not afraid to challenge management if they feel they are right. Right now with times as tough as they have ever been and with management under pressure to make changes by challenging our contract and our past practices, we need to be vigilant more than ever.

I am extremely proud to represent the membership of the Queens Division, and I will continue to fight everyday for what is right especially in the most difficult of times.

To be a good Supervisor; Remember the 7 P’s, Proper Planning and Preparation Prevents Piss Poor Performance.